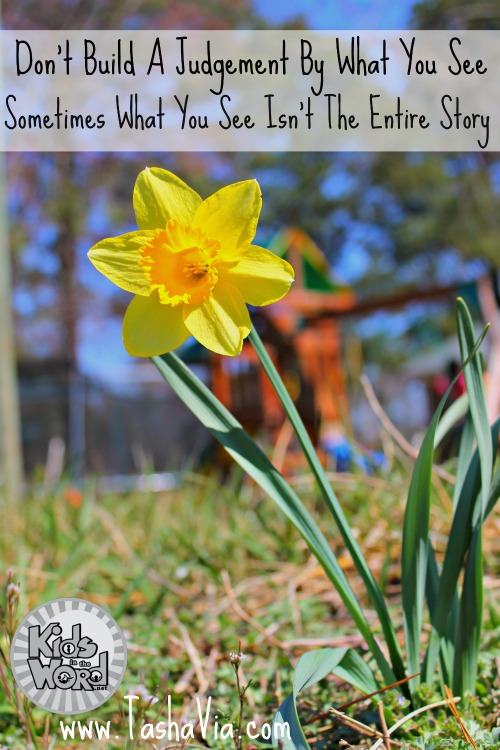 Our home is located about 3/4 of a mile away from the town park. If we want to walk there we take the sidewalk up to the side road, which leads directly to the trails that bring us to the park. We spend a lot of time at the three different parks that are adjoined to this trail.

Once we finally get there (after lugging 3 scooters and 2 bicycles), I am typically ready for a break while the kids run (and climb and hike) to their hearts' content. Sometimes I just sit in silence and ponder life. Other times you'll see me pushing kids in swings or holding them up to the monkey bars. On occasion, I spend that time getting some stuff done that has been put on the back burner because mothering has demanded all of me.

Those spare minutes at the park allow me a chance to check my email and side-business orders on Etsy, as well as answer a couple of other text streams that have gone unanswered during the day.

So one day while scrolling through Facebook, you can imagine the surprise, and maybe even offense, at reading a rant from a friend about how she observed a mom at a park “ignoring her children while playing on her phone.” The writer was judging this other mom's actions without any kind of context and bashing all other parents who spend too much time on their phones and not with their kids.

She could have very easily been writing that update about me! And what if it WERE about me?

The writer of that post wasn't at my home all morning long, seeing how I had spent the morning playing with the kids, making forts in the living room, jumping on the trampoline, having a tea party with the girls, and printing off superhero coloring pictures for the boys. She doesn't know that after a long walk to the park with a 3-year-old who is determined to ride his scooter the entire 3/4 of a mile on rough terrain, this mama is overdue for a break while my small Colony occupies themselves with their fresh surroundings.

The mom who posted those negative things had NO IDEA what the mom she was observing had gone through that day. Josh and I have often found ourselves at that same park, during difficult seasons, to allow a few minutes of uninterrupted conversation to process tough information while the kids happily play together.

The purpose of this post isn't necessarily to argue with the Facebook poster. I do agree that we, as parents, need to be SO aware of the time spent on our computers and phones when our kids are needing our attention. The pull for instant updates and the immediate gratification of “likes” is hard to fight against, but this particular fight isn't an option in our home.

Rather, I want to charge us, as mothers, to try to see the full picture and context before passing judgement. It is so easy to rail against other parents who do things differently or have unruly children, but do you even know what that child is going through to make him so unruly, or what the mother is on the phone about?

And if we have no way of knowing the full story or context of the situation then maybe we should just keep our words and our judgements to ourselves.

Besides, what benefit is it if we publicly rant and rail against other moms and families? What if we turned it inward as a reminder to keep our own focus secured on Christ.

Instead, I charge us moms to say a quick prayer for the mother on her phone at the park. How about even striking up a friendly conversation?

Try to imagine every possible scenario that could be going on. Show love, tenderness, and compassion. Think about the kind of example you're being for your kids. How would you want them to respond to another child?

And IF that mama is just being a lazy parent, then resolve not to be that way yourself. Other people's actions can be great reminders and accountability for our own life journey.