I have to seriously brag on my big boy today…

1.  Jonathan's learning to be independent.  Two days in a row this week he has successfully done two pages in his Math Mammoth 1A math book – without me.  I've been a little slack the last few weeks in my morning routine and haven't made it to a shower until during Jacob's.  So, Jonathan and I made a game out of who could finish first, me in the shower or him with his math.  He beat me both days.  He's mastering his addition facts up to 10 and enjoys working with numbers so he's to a point where the work is easy and focusing is the challenge. 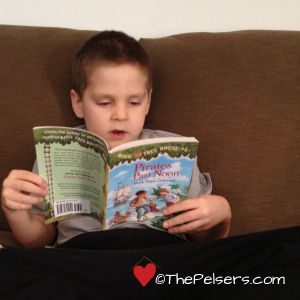 2.  Jonathan is really developing a love for reading.  He knows that he has to read before he can play electronic games, so he has been reading a chapter early in the day so he's covered for a little game time.  Then later in the day he usually reads another chapter or two because he loves the story.  He's read so many Magic Tree House books in the last few weeks, I've lost count.  One day he stopped, sighed a happy and contended sigh, said to me, “Mommy, I love to read.”  Does it get any better than that? 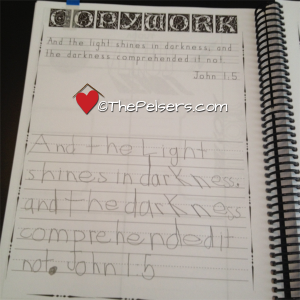 3.  Jonathan's handwriting is incredibile for a 4 year old, almost 5 year old boy.  Boys in general don't usually have fine motor skills like this at his age and aren't usually as interested in writing.  We joke that his handwriting is better than Daddy's!

Jonathan has a big day coming up this weekend – his 5th birthday!  Josh's parents arrive this evening for a long weekend to celebrate with us.  Jonathan is so excited about their arrival that he's been counting down for weeks.

Thank you to these blogs for inspiring and provoking thoughtfulness, thankfulness, remembrance, and showing my how to celebrate my boys: