I recently found the iOS app CitiBlox. Jonathan loves iOS games and I had a feeling this one was going to be a hit with him.

The creator is a mom and her kids – how cool is that! They are all working together to build and market their apps at AdAir Mobile. CitiBlox is just the first app with more coming soon. 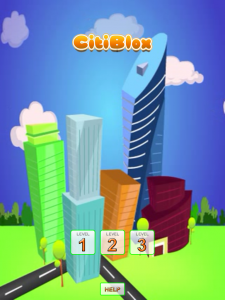 Do you remember the pencil and paper games with a grid of dots and the person who closes a box wins that box? Did you play that as a kids? Well, CitiBlox is based off that same concept. 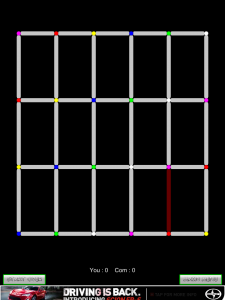 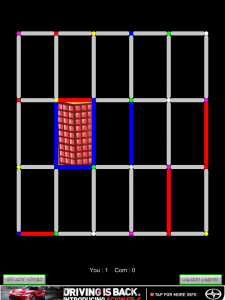 When you complete a box, you get another turn. But, watch out, the “computer” is trying to completely blocks too! When you complete a box, you discover a portion of the “city” picture behind the puzzle, but if the computer completes a block, it is grayed out. If you have the most boxes at the end, the full city picture will be revealed to you. There are three levels to chose from and as you go up in level there are more boxes. 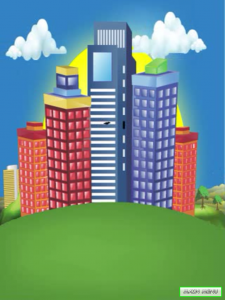 I love that CitiBlox reinforces problem solving skills in a fun and entertaining way. It took Jonathan (5 years old) a few rounds to get the hang of the game and within a few days, he was playing like a pro. It was quite funny to watch him comparing his score to the computer and try hard to stay ahead of the computer. It's not just for kids – I even found my husband Josh playing the game a few times!

Jonathan says that he loves that he can win in CitiBlox and that there are three levels. He did says that he wished there were more levels. Screen real estate is limited though, so I don't think that's possible! He just doesn't want to stop playing!

CitiBlox is FREE for iOS. We played on both the iPad and iPhone, but is ad supported. The iPad is a little easier because of the larger screen, but both devices were great for playing CitiBlox. I'm sure that an iPod touch experience would be similar to the iPhone. A $.99 ad-less version is expected soon. 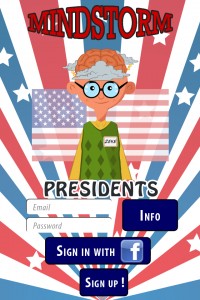 They are also working on a series of apps called Mind Storm, the first of which is about the presidents. Watch for that coming soon!

Disclosure: I received this app for free in exchange for an honest review and was compensated for my time.