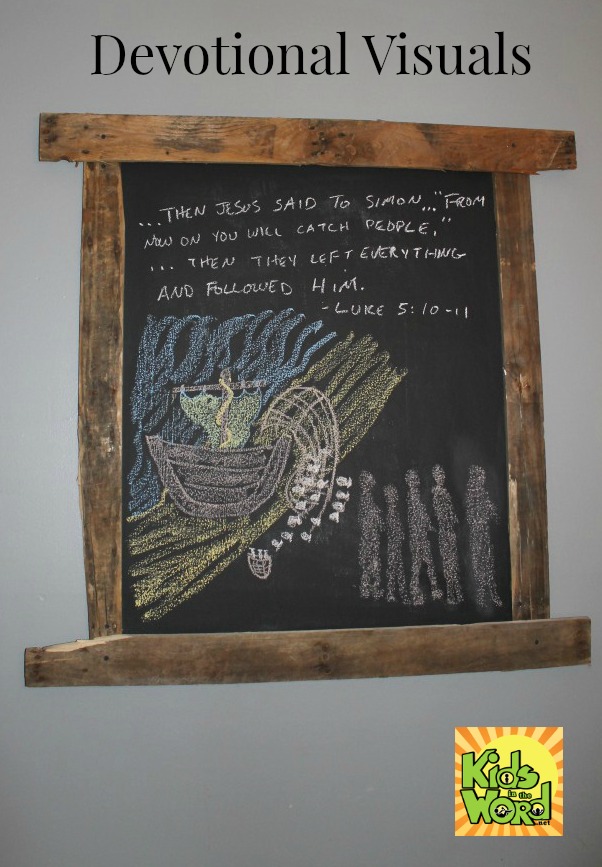 My husband, Josh, and I have 5 littles in our house. We refer to ourselves as the Via Colony.

One question we get asked quite often is, “What does family devotion time look like at your house?”

Almost every night we do a family devotion time at bedtime, which can often be confused with “family commotion” time. This time is contingent on the evening's activities, schedules, attitudes, happy heart statuses, and day of the week as to which route we take.

But given the different age groups of our kids (they range from 2-9) we have to change it up a lot in order to be able to reach all of their little hearts, through their very short attention spans.

Sometimes it's just a quick prayer, while other times morph into the Via Family worship band, as the kids begin pulling out all the instruments strategically placed around the house (my husband and I are worship leaders, musicians, and song writers). We sing songs together and the kids take turns “preaching.” We try not to be too legalistic with this time, allowing for fun while also trying to balance the respect God deserves.

Other times, the littlest little gets too antsy to sit around while the older ones ask their deep theological questions, so I take him in the boys' room to read books while daddy dives in the Word to answer as best he can.

But there is one tradition that began a few months back that has quickly become a favorite among the Colony.

Josh's day off is Friday so we tend to have a more leisurely breakfast time together. Very early on, as parents, we began taking advantage of the resources the kids would bring home from their classes at our church here in Raleigh, NC. We would write down their verse for the month on our wall chalkboard in the dining room and go through the talking points together throughout the month to reinforce what they were learning on Sundays.

It quickly turned into more, though. We began pulling out a verse that would apply to the current bickering episodes or heart issues our kids (or their parents) were facing that week. One day Josh pulled out a scripture that the Lord had laid on his heart in his own personal quiet time earlier that morning. After writing the verse on the board, as we did every other time, he left room at the bottom and drew a picture to illustrate how it spoke to him. It was such a hit among the Colony that he did it again the next week, and the next!

This really became a big hit, not only for our family, but for other people who would come in for dinner or a visit and see it. It didn't take long, after posting one on Instagram, to begin hearing stories of other families using these visuals in conjunction with their own family devotions!

This turned into what is now called “The Colony Devotional Visual” that I post on Instagram every week.

So, whether we are relating to a verse the kids are learning at church, or trying to stick a Christian fundamental in their hearts, or simply sharing what the Lord is teaching us, the parents, we are now adding a picture to the verse to help them visualize the action behind the words they are memorizing.