Over the weekend, we took our boys to visit Josh's grandmother.  She's been living alone in the community where they established their home decades ago, but she's had no family in town since her boys moved away to start their own families. Since moving back to California, we're the closest family members and we live an hour away.

She's growing older and has decided that it is time to move into a retirement type community closer to one of her boys. This was our last chance to see her without driving many more hours for a visit. The boys had the chance to talk with her and get to know her. It's one of the few opportunities they've had since for most of their lives we've lived across the country from her.

If you have older parents or grandparents, you've probably noticed an interesting phenomenon as they grow older. They tell more stories. Often they tell the same stories over the over again. Admittedly, the retelling of the same stories is sometimes a disfunction of a failing memory, but I truly believe that this is also God's way of passing down important history and truths. The stories I've heard retold time and time again by my grandparents and my husband's grandparents are those attached to strong memories and the important lessons they've learned over the years. 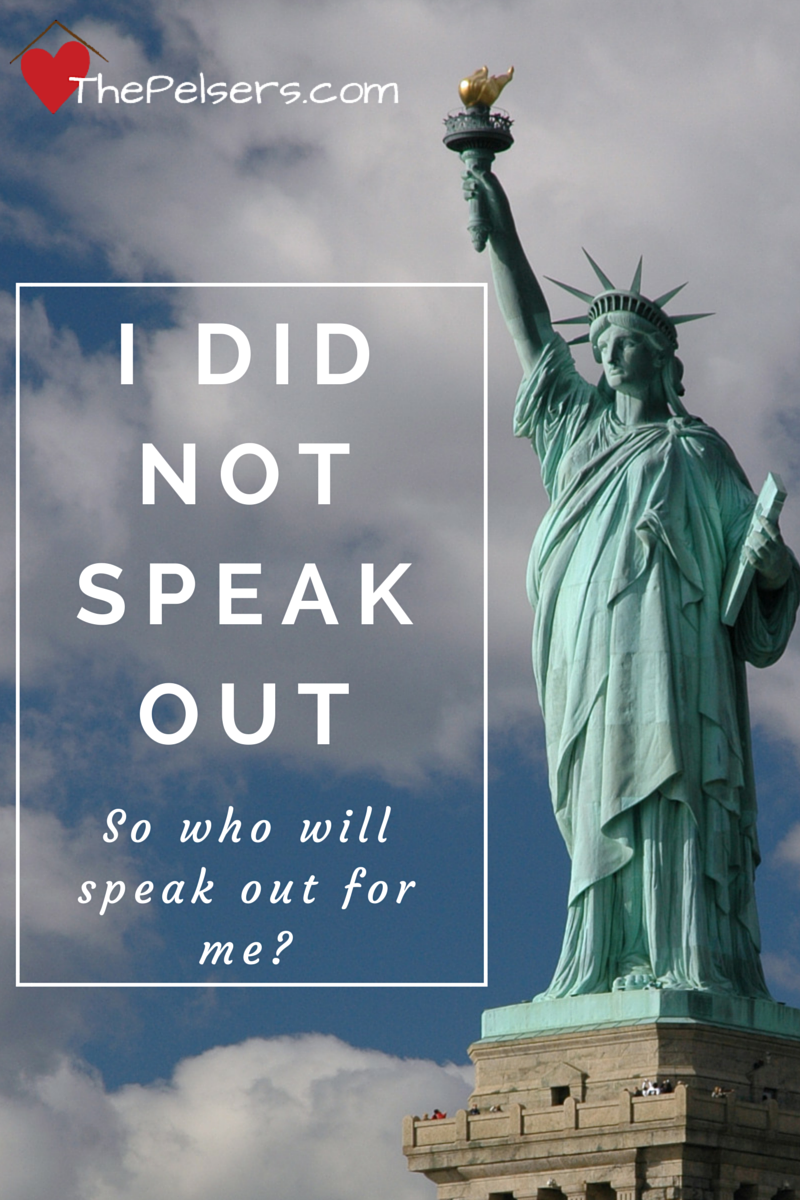 This recent visit was no different. I'm know I've heard her tell the story before, but it didn't stick with me until this time. She told of being stationed in post-Nazi Germany with her husband and family. She talked about working alongside a local German parish priest who had been in a Nazi prison camp. He recited to her on at least one occasion a version of the words made famous by German Pastor Martin Niemöller:

“When the Nazis came for the communists,
I did not speak out;
As I was not a communist.

When they came for the Jews,
I did not speak out;
As I was not a Jew.

When they came for me,
there was no one left to speak out.”

Note: Many versions of this quote exist because he said it extemporaneously in many speeches over the years. According to Wikiquote, he said in a 1971 interview that this version is his preferred version.

This year is the third year that I have been teaching history to Jonathan. We've been making our way through the Reformation and the Renaissance this school year. I think I'm learning just as much as he is!

Why do I teach history starting in early elementary grades? One reason is because so much of what we do now and in the future is based on the past. As George Santayana says in Volume 1 of Reason in Common Sense:

“Those who cannot remember the past are condemned to repeat it.”

This year in our history studies, we've learned about things like Islamic conflicts across Europe, north Africa, and the Middle East that help today's current events make more sense. We've also read about the first Europeans who came to the Americas as well Mayflower Compact and other pre-Revolutionary War documents and ideas that shaped out nation. It sure makes you think about current pushes to remove our personal liberties at both the federal and state levels.

Whether it's something that seems trivial like a plastic bag ban in California (which is currently on hold awaiting a state-wide vote) or more egregious assaults like mandatory vaccination bills and other initiatives that encroach on your personal and parental rights… What are you going to do? Are you going to speak out?

You might believe that vaccines are the best advancement ever made in medical technology, but is a law forcing every parent to vaccinate their children the best way to make use of these vaccines? What about education? What about unbiased studies showing their effectiveness? What about removing the “vaccine court” and federal protections to force manufacturers of vaccines to be more ethical and responsible in the process of creating and distributing vaccines?

“We hold these truths to be self-evident, that all men are created equal, that they are endowed by their Creator with certain unalienable Rights, that among these are Life, Liberty and the pursuit of Happiness.”

from The Bill of Rights

Adding countless laws and restrictions of personal liberties is not what the United States was founded on. Our country was founded on the ideas like those of the pilgrims that we should be looking out for the rights of those around us. Our nation was founded on the idea that individuals have “unalienable rights” including (but not limited to) life, liberty, and the pursuit of happiness.

Whose rights are you going to stand up for today? If you don't speak up for the personal rights of those you don't agree with, who will be left to speak for you when your rights are under attack?