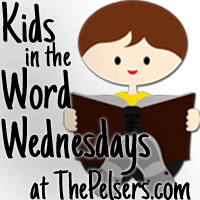 We're continuing to work our way through Apologia's Who is God? book.  We've continued to talk about how God speaks to us. {Creation, the Bible, and Jesus… in case you forgot from last week.}  Isaiah 45:19 is one of the key verses in this lesson.  I wrote that verse out on a piece of writing paper and then Jonathan copied it.  {I'm still amazed that this kid is writing in cursive and writing so neatly.} 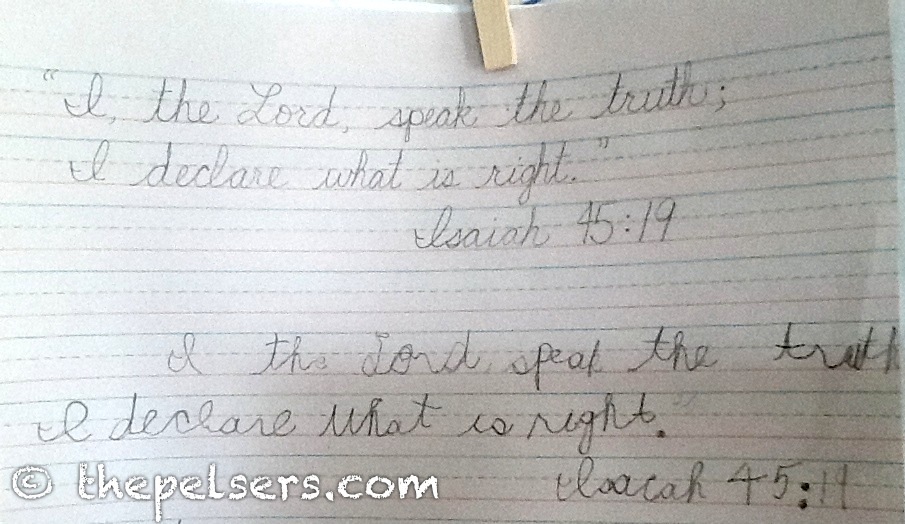 We also started talked more directly about having a quiet time and devotions.  Jonathan often gets up and comes into my room while I'm reading in the mornings.  I explained to him that the Bibles that he usually reads and that we read to him are Bible storybooks and not the full text of the Bible.  I think that went in one ear and out the other.  At the same time, he seemed to understand that Mommy reads her Bible in the mornings either in paper or on the iPad.  I suggested that he should get one of his Bibles to read in the mornings.  That went over like a lead balloon – probably because he was playing with Legos while we had this discussion.  I think the next time the opportunity presents itself, I'll tell him he should read before he gets the Legos out.

We're into the stories about Joseph now in Jonathan's Bible.  Jonathan is retaining some detail.  He doesn't like to narrate the stories, but he will with some prompting and questions from me along the way.  It worked out beautifully that we're studying Egypt in the history and geography portion of Sonlight Core A.  He liked seeing Egypt on the map and coloring it in.  He seems to have a very visual memory.  I found him days later drawing shapes on a piece of paper and those shapes were the country of Egypt – surprisingly similar to the actual shape of the country.

How have you kept your kids in the Word this week?  Leave a comment or link up a blog post.  {See guidelines here.}